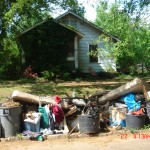 Five of the eleven defendants charged in connection with a scheme involving straw buyers and the development of Seven Falls, a golf course and luxury residential community in Henderson County, North Carolina, have been sentenced to prison.

George M. Gabler, 60, Fletcher, N.C., was convicted of one count of willfully failing to report misconduct associated with two Seven Falls lot loans in March 2010. In court documents, Gabler admitted that he withheld documents from a federal grand jury knowing that they were related to fraudulent loans taken out on behalf of conspirator Keith Vinson. For this offense, Gabler, a former Certified Public Accountant, was sentenced to two years of probation, including 500 hours of community service and a $5,000 fine.

Keith Vinson, was convicted at trial in October 2013 of conspiracy, bank fraud, wire fraud, and money laundering conspiracy. He is scheduled to be sentenced on June 25, 2015 in Asheville, N.C.

In order to advance this scheme Vinson, Chapman, Cashion and others recruited local bank officials including George Gordon “Buddy” Greenwood and Ted Durham, who at the time were, respectively President of the Bank of Asheville and the President of Pisgah Community Bank. When bank officials realized that they had reached their legal lending limits with respect to some of the straw borrowers, additional straw borrowers were recruited to the scheme and more straw borrower loans were made to them. Additional straw borrower loans were also necessary to keep loans current, a scheme known as “loan kiting.” The loan kiting scheme became necessary when conspirators were unable to make payments on loans made early in the scheme. Seven Falls and another luxury residential golf development by Vinson named “Queens Gap” failed resulting in millions in property losses. In addition, both the Bank of Asheville and Pisgah Community Bank failed and were taken over by the FDIC.

The investigation was being jointly handled by the FBI, IRS-CI, and FDIC-OIG. Assistant U.S. Attorneys Don Gast and Michael Savage are in charge of the prosecution.